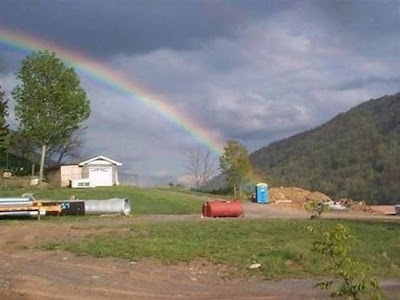 I've been thinking a lot lately about the hassles of traveling when one suffers from IBS. I think about this a lot during the summer because this is the glorious time for vacations, long rides in the car, trips to far-off destinations and long walks on the beach. I am reminded of a time just last year when a traveling trip went horribly wrong and IBS was the culprit. It's embarrassing to say the least, but maybe once you read about it, you can relate. So here is my humiliating tale of traveler's woe.

Last fall, my boyfriend got stuck without a ride in Myrtle Beach. I had just enjoyed a dinner of greasy food and a large iced tea and was gearing up for a night of watching movies and enjoying a nice evening alone, when the phone rang at 9pm.
Craig needed me to pick him up. Now mind you, Myrtle Beach was close to four hours away and not particularly something I wanted to do. I'm not sure why I didn't just make him take the bus (probably because that thought didn't cross my mind). I put on my comfy driving clothes, grabbed our dog for safety, put gas in the car, grabbed a roll of TP (just in case) and headed down the lonely stretch of country road toward the beach.

About forty-five minutes into my journey, just me and the dog, my stomach started rumbling and doing its usual flip-flop. I thought it was just nerves because I don't enjoy driving at night and I would be driving into bumfuck. If you saw some of the areas you have to go, visions of any scary movie would come to mind.

A few moments later the urge to vomit came over me and I had to lurch the car onto the side of the road and wretched for ten minutes while the dog looked at me in horror. Whatever greasy meal I had eaten was now out of me or so I thought. I pulled myself together and made it another thirty minutes into a tiny town where I threw up again this time in a park barely having enough time to open the car door. Next I threw up another thirty minutes down the way in a church parking lot. I was a hot mess and crying and I was already half-way to the beach, so there was no way I was leaving Craig without a ride. I had come this far, I just had to keep going. I started downing Pepto pills and praying that I would not throw up anymore. The dog I think was worried about me. he kept looking at me with funny looks.

Well after four Pepto pills and a few sips of coke, guess what happened? No, not puking this time, just imagine. It was already midnight and I was driving down a two lane road in the middle of freaking nowhere when the urge to go to the bathroom was so severe that I wasn't sure what I was going to do, so I once again lurched the car over to the shoulder of the road, turned the headlights off, pushed the dog in the back seat and jumped in the passenger seat, barely getting my butt out the car door before all hell broke loose. So as embarrassing as it is to be reminded actually happened to me, it's even more embarrassing that I'm actually telling you all about it right now.

Even though I was alone on a desolate stretch of wood with my ass hanging out the side of the door, an actual big truck was coming right this way. First I was scared he would see me with my ass hanging out the car door and then I was so scared he would think I needed help so I cleaned up as fast as I could and jumped out the car and headed over to the driver side to get back in and head to the beach.

Thinking that my night could get no worse, it did. I went to pull the door handle to get in my side of the car and it was locked. To make matters worse, the car was running with my cell phone and dog inside. How the hell did I manage to get myself into this predicament? Ahh, yes I remember now, I have freaking IBS and today it was beating the shit out of me, literally from all ends. I just broke down and cried in the middle of the freaking night with my dog pressing his face up to the window looking at me like I was in sane.

Then I began to think of all the horror movies that I had watched and I thought about all the jethro-looking men in trucks that would come kidnap me and all that would be left would be my running car, a barking dog and pile of shit next to it. Maybe the police would come and think that I had run away from the embarrassment alone. When he saw what had taken place he would have laughed at me, then I would be the laughing stock of Hicksville.

I looked up to the heaven and the stars, put my hands in the air and yelled REALLY! Then I prayed that there was a rock somewhere because I was not going to let IBS win this time. I would find a way to get in that car if I had to use my damn shoe to break the window. I walked over to the other side of the car avoiding you know what and HAIL MARY, the passenger door was not all the way shut, so I jumped for joy, jumped over my shit and jumped back in my car and cried even harder, I was just so happy to be back in my car. I had forgotten that I could still be kidnapped but I had hoped the stench of my shit would be both a killer and bear deterrent.

I started back on the road and one hour and thirty minutes later, I hugged my boyfriend and told him about my incredible story of what I had to go through and four hours after that, we finally made it back home. I was exhausted, and annoyed and so happy to be home. I told Craig if that ever happened again, he better learn to hitchhike, cause this ass ain't going to pick him up no matter what.
But Looking back on now, I really do believe that ship happens and you just have to learn to deal with it, the good, bad and the super ugly trips to hell and back.
Posted by cruotolo1978 at 7:39 AM

Is it wrong that I really think the name of this blog should be 'shit happens'? Because that would be both funny and true!

Bravo for being brave enough to share this with the world.

male use of clomid | order clomid no prescription - medication clomid, long term clomid use in men

getting pregnant after stopping clomid | how much does clomid cost without insurance - where to buy clomid online safely, clomid lh