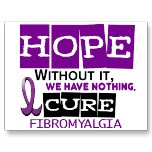 On May 12, 2012, American's all over the world celebrated National Fibromyalgia Awareness Day. Over 2,500 people per week will be diagnosed with Fibromyalgia. The numbers are rising every year. At first they thought it was all in our heads and now we have a voice that is heard. We are not crazy. We did not invent this condition.

Three weeks ago after several months of weight loss of ten pounds, I underwent an Upper Endoscopy where I was told I developed non-cancerous benign fundi stomach polyps and gastritis and now have added yet another medication to my already growing daily regiment of pills. It was a depressing day, but I realized that I am not alone.
This past week, I spent two days at doctor's offices and over $100.00 for doctor bills (Thanks Mom) and was told that things are getting better. But are there? With Fibromyalgia, today may be a good day, and tomorrow may be a good day; buy next week may be five days of hell.

Having Fibromyalgia is a crapshoot. But the more people that support the National Fibromyalgia Association, the more people stick together and get the word out about this chronic illness, we can fight back, we can win. We can live better lives. We can do more things. We may not be able to climb mountains, but we can conquer the hill.

This I believe. This is how things change. I believe that Fibromyalgia and IBS WILL NOT define me, WILL NOT Confine me and WILL NOT deny me the chance at a happy life. Don’t let your illness stand in the way.

Raise your hands in the air and fight, fight back for freedom from chronic pain. Fight for long walks on the beach and dancing in the club. Fight for it. It’s worth it.

Review my page - get backlinks

I've gone ahead and included a backlink back to your internet site from one of my clientele requesting it. We have used your internet site URL: http://www.blogger.com/comment.g?blogID=9106401041896882668&postID=2410271819749475831 and blog title: Blogger: Confessions of an Imodium Addict to ensure you get the proper anchor text. If you woud like to check out where your hyperlink has been placed, please e mail me at: kathrynoneal@arcor.de. Cheers

Woah! I'm really enjoying the template/theme of this blog. It's simple, yet
effective. A lot of times it's very difficult to get that "perfect balance" between usability and appearance. I must say you've done a fantastic job with this.
Additionally, the blog loads extremely fast for me
on Safari. Superb Blog!

Have a look at my blog post ... relevant webpage

Would you mind if I quote a small number of your articles as long as I provide credit and sources
back to your site: http://www.blogger.com/comment.g?blogID=9106401041896882668&postID=2410271819749475831.
I'll aslo be certain to give you the proper anchor-text link using your website title: Blogger: Confessions of an Imodium Addict. Be sure to let me know if this is okay with you. With thanks

Good day! Do you know if they make any plugins to assist with SEO?

I'm trying to get my blog to rank for some targeted keywords but I'm
not seeing very good success. If you know of
any please share. Kudos!

Neat blog! Is your theme custom made or did you download it from somewhere?
A theme like yours with a few simple adjustements would really
make my blog jump out. Please let me know where you got your theme.
Many thanks

Thanks for the comments. Yes, you can use my article for your article just quote me and send me a link so I can read what you have written.

My blog is not custom, juts one of the themes on blogspot.com.

Thanks for the comments and input.
Christina

Hi there! Quick question that's totally off topic. Do you know how to make your site mobile friendly? My weblog looks weird when viewing from my iphone4. I'm
trying to find a theme or plugin that might be able to fix this problem.
If you have any suggestions, please share.
Thanks!

Hmm it seems like your site ate my first comment (it was super long) so I
guess I'll just sum it up what I submitted and say, I'm thoroughly enjoying your blog.
I too am an aspiring blog blogger but I'm still new to the whole thing. Do you have any tips and hints for inexperienced blog writers? I'd
genuinely appreciate it.

Hey just stumbled upon your website via Bing after
I typed in, "Blogger: Confessions of an Imodium Addict" or perhaps something similar (can't quite remember exactly). In any case, I'm happy
I found it because your content is exactly what I'm looking for (writing a college paper) and I hope you don't mind if I gather
some information from here and I will of course credit you as the reference.
Thank you very much.

Do you mind if I quote a couple of your articles as
long as I provide credit and sources back to
your site? My website is in the exact same niche as yours and my visitors
would genuinely benefit from some of the information you
provide here. Please let me know if this ok with you.
Thanks!

Also visit my weblog ... just click the up coming site ::

Hi there, i read your blog occasionally and i own a similar one and i
was just wondering if you get a lot of spam comments?
If so how do you reduce it, any plugin or anything you can recommend?
I get so much lately it's driving me mad so any help is very much appreciated.

Thank you for visiting my blog.

Wonderful blog! I found it while surfing around on Yahoo News.
Do you have any suggestions on how to get
listed in Yahoo News? I've been trying for a while but I never seem to get there! Thanks

Hi there! This is the second time visiting now and I personally just
wanted to say I truley enjoy looking through your blog website.
I decided to bookmark it at digg.com with your title: Blogger:
Confessions of an Imodium Addict and your Domain name: http://www.
blogger.com/comment.g?blogID=9106401041896882668&postID=2410271819749475831.

I hope this is all right with you, I'm attempting to give your fantastic blog a bit more coverage. Be back soon.

Here is my weblog: take a look at the site here ()

When I originally commented I clicked the "Notify me when new comments are added" checkbox and
now each time a comment is added I get four emails with the same comment.
Is there any way you can remove people from that service?
Bless you!

Hello! Do you know if they make any plugins to safeguard against hackers?
I'm kinda paranoid about losing everything I've worked hard on.
Any suggestions?

I like what you guys tend to be up too. This type of clever work
and exposure! Keep up the amazing works guys I've added you guys to my blogroll.

First off I want to say great blog! I had a quick question which I'd like to ask if you don't mind.

I was curious to find out how you center yourself and clear your
head prior to writing. I've had a hard time clearing my thoughts in getting my ideas out there. I do take pleasure in writing but it just seems like the first 10 to 15 minutes are generally lost simply just trying to figure out how to begin. Any recommendations or hints? Kudos!

I like what you guys tend to be up too. Such clever work and exposure!
Keep up the great works guys I've added you guys to blogroll.

They go to the toilet frequently, and tend to 'squirt' their liquidy droppings rather
than simply 'squat'. Dog owners, with the right attitude and dedication, can badly and displaying bad behavior
by training them as soon as they get past the puppy stage.

Here is my homepage: best vacuum for pet hair

I was sugtested this web sitre through my cousin. I'm no longer positive whether this publish is written through him
as no one else recognize such specified aout my problem.
You're incredible! Thank you!

Hi there! Quick question that's completely off topic.
Do you know how to make your site mlbile friendly?
My website looks weird when viewing from myy iphone.
I'm trying to find a theme or plugin that might be abvle
to fix thiks problem. If you have anny recommendations, please share.
Manyy thanks!