Whale Poop Vital For The Ocean 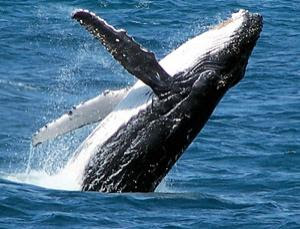 I just read an article that was written by Wendy Zuckerman in April of 2010 talking about how whale poop is good for the oceans. When whales poop, the poop creates large quantities of iron, which is what helps carbon-sequestering phytoplankton thrive in the Southern Ocean. Studies have shown that iron is "crucial to ocean health because plankton need it to grow. If you add soluable iron to the ocean, you get instant phytoplankton growth." (Quoted by Stephen Nicol of the Australian Antartic Division, based in Kingston, Tasmania)

Nicol's team studied 27 different samples of poop from four different species of baleen whales, and found that on average whale poop had 10 million times as much iron as Antartic seawater. So whale poop will ultimately increase the amount of CO2 that the Southern Ocean can sequester. Who would have thought that whale poop was so valuable and such a wonderful thing?

Harvard also recently did research on whale poop and suggests that the "liquid fecal matter, rich in nutrients, has a huge positive influence on the productivity of ocean fisheries, Joe Roman, a whale biologist from the University of Vermont and his colleague, James McCarthy from Harvard University, have discovered."

Their discovery, published Oct. 11 in the journal PLoS ONE, is what Roman calls a "whale pump." Whales, they found, carry nutrients such as nitrogen from the depths where they feed back to the surface via their feces. This functions as an upward biological pump, reversing the assumption of some scientists that whales accelerate the loss of nutrients to the bottom. 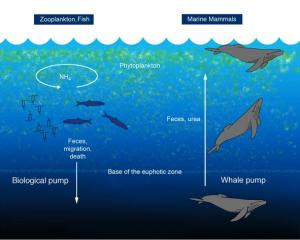 And this nitrogen input in the Gulf of Maine is "more than the input of all rivers combined," they write, some 23,000 metric tons each year.

"It is well known that microbes, plankton, and fish recycle nutrients in ocean waters, but whales and other marine mammals have largely been ignored in this cycle. Yet this study shows that whales historically played a central role in the productivity of ocean ecosystems -- and continue to do so despite diminished populations."

"We think whales form a really important direct influence on the production of plants at the base of this food web," says McCarthy.

"We found that whales increase primary productivity," Roman says, allowing more phytoplankton to grow, which then "pushes up the secondary productivity," he says, of the critters that rely on the plankton. The result: "bigger fisheries and higher abundances throughout regions where whales occur in high densities," Roman says.

"In areas where whales were once more numerous than they are today, we suggest that they were more productive," say McCarthy.

All of this research is evident to me that whales and whale poop play a more prominent role in ecosystems than once believed. I don't think I'll ever be able to look at a whale again without first remarking on their majestic beauty, but to also know that we must keep them safe, so that our oceans will remain healthy.
Posted by cruotolo1978 at 9:07 AM

How would have thought that whale poop was so useful. It's interesting to me how it helps pull carbon from the atmosphere. Not only that but phytoplankton and other small organisms eat it and fish eat those organisms which help repopulate the fish supply and stabilize the food chain.