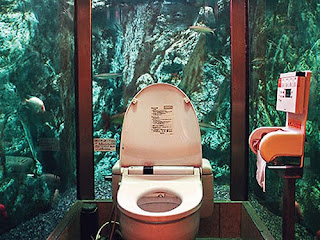 I just found out that in Japan they have built a women's restroom that is surrounded by a salt water aquarium on three sides that has swimming fish and a turtle. It's a shitter's heaven. A sanctuary for people like me. And it's only for women. They did not build one for men.

This amazing bathroom is located at Mumin Papa Café in Akashi, Japan and was built in 2007. The owner of the cafe says it cost 30 Million Yen (approx. $270,000 at the time) to build, which is not in the budget of most restaurants. It’s filled with all sorts of exotic fish, including the “famous” male sea turtle that watching women to their business. Surprisingly, many women do not claim it impairs their duty or gives them stage fright. The surrounding aquarium was designed to mimic the feeling of relieving yourself while swimming in the ocean.

This makes me wonder why doctor's offices and people in America have not created one here. For people who suffer from IBS and visit bathrooms often, this type of bathroom would make me much more relaxed and not be so anxious when making multiple trips to the bathroom. I might actually look forward to going to the bathroom for a change. Now instead of reading magazines with stupid gossip or observing ceiling tiles, I can now mingle with the fishes and pretend I'm a mermaid and maybe instead of talking to myself, I'll talk to the turtle.

Thanks for passing this along. Don't have IBS, but being a Pisces - I'd feel right at home. Guess no one in the US is willing to waste all that dough on a bodily function! LOL